Writing a set of instructions

This week the children have been writing a set of instructions to help their audience catch a clown, who has been spotted running around our school grounds! The children came up with some brilliant ideas to capture the clown and were able to produce step by step instructions on how to execute there ideas! They tried really hard to include all there end of year targets, they produced some fantastic work! Take a look at some of our instructions in case you ever have a clown problem!

This week the children have been creating an information text to give the reader important information about rivers. They had to include their text organisation targets alongside rich and varied vocabulary. Take a look at some of our amazing work!

This week the children have been writing a persuasive letter to Tom (from our class novel) to persuade him to go out and gather fish for the village before the storm comes. The children tried to use various sentence types and a rage of sentence openers to meet their targets and to make their letter amazing! Well done!

This week in English the children have written a piece of dialogue. This piece of work was an assesses piece, therefore they had to include all of their targets. They children tried very hard to do this and the scores were brilliant! Well done!

This week in English the children explored our new class novel 'The Mousehole Cat'. The children began by focusing on the front cover of the book, which shows a lovely little fishing village. After hearing some background information about the village, the children then wrote a comparison, comparing the village during summer and winter. They tried really hard to include their targets and use lots of comparing and contrasting vocabulary. Y3/4B produced some amazing work! Take a look!

This week in English the children have been planning and writing a setting description based around a picture from our class novel. At the beginning of the week, the children made a plan of what they needed to include in their description. They were able to identify the key elements such as taste, smell, see, hear and touch. Following on from this the children then applied the key features from their plan into a written description. The children needed to use expanded noun phrases and varied vocabulary in their work, this was implemented really well! Well done!

This week Y3/4B were transported to a crime scene at an Anderson Shelter! One of the soldiers Ray had been abducted but there was some evidence left behind. It was up to the children to report this breaking news! In groups the children recorded each other delivering the report and showed some amazing speaking and listening skills! This was then applied to a written report, the children tried really hard to include all their targets! We had some amazing reports! Take a look at some of our work!

Following on from performing and planning our poem, today the children wrote their own using adventurous vocabulary. We had some amazing work! Take a look! 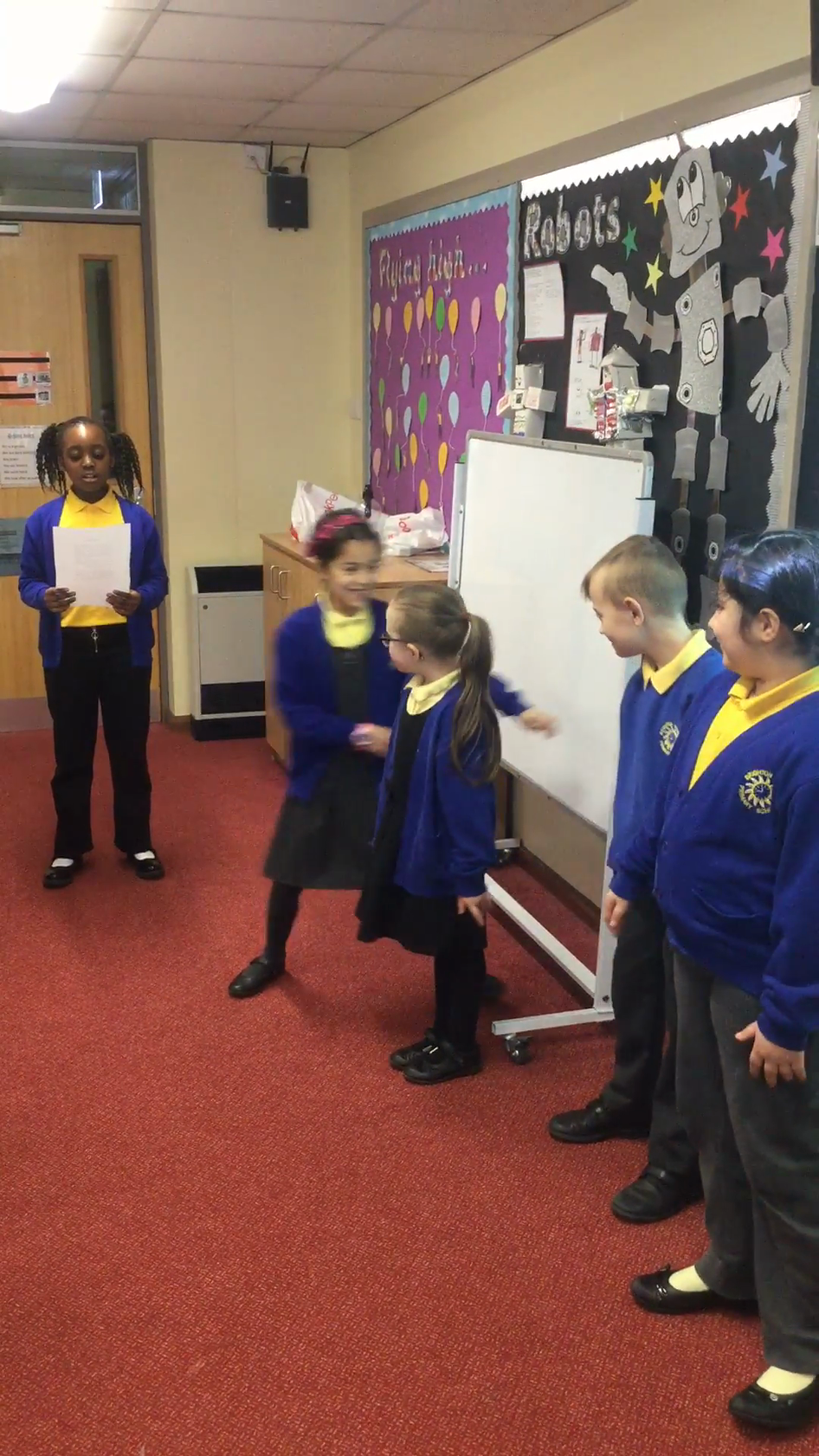 Using our class novel 'Where the Poppies Now Grow', the children have been writing an informal letter from one of the main characters Ben to his friend Ray. Most children were able to confidently include all of the relevant features of an informal letter to ensure they are working towards their end of year targets. The children were able to include their text organisation targets, making sure their work was appropriately laid out and organised into paragraphs. Take a look at some of our letters!

This week in English we have been practising our speaking and listening skills. The children took part in hot seating to help them with their diary entry the following day. The children were able to ask a range of questions about how Tranio felt on the day of the eruption in Pompeii. Enjoy looking through the pictures.

This week the children have been focusing on their sentence types to try make their writing engaging for the reader.  The children wrote setting descriptions based on our class novel Escape to Pompeii. The children incorporated expanded noun phrases and complex sentences into their description as well as their age related targets. Keep up the good work year 3/4B! Have a look at some of our setting descriptions.

During the first week back after the Christmas holidays, the children were given the task of writing a set of instructions for building a Snowman and dog. The children all tried really hard to incorporate their writing targets into their work and managed to produce some amazing instructions! 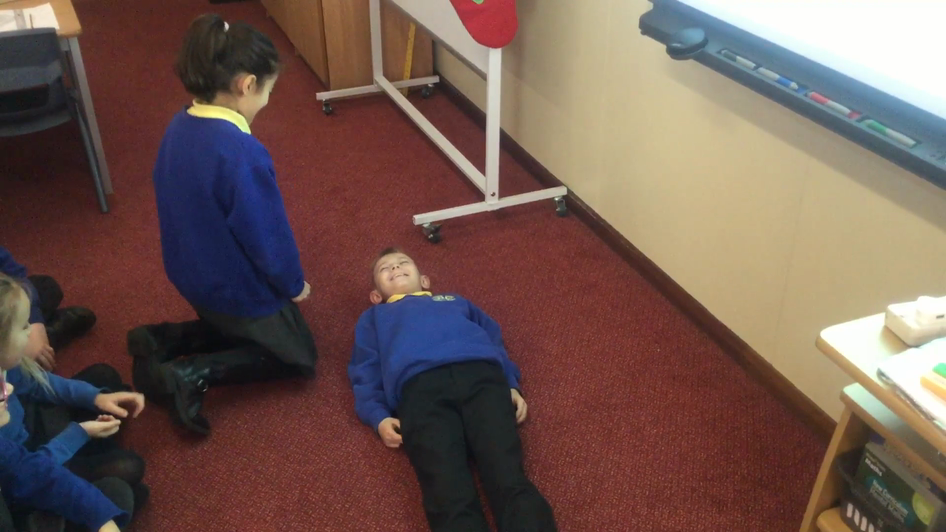 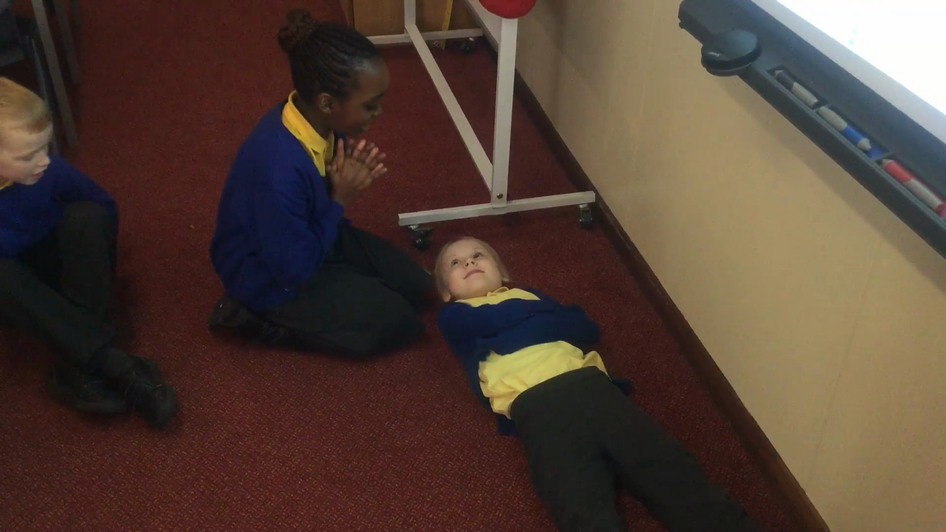 This week in English the children have been identifying the features of a play script. They were able to identify several features including; stage directions, title, setting the scene, cast list and many more. Following on from this, the children then produced their own play script based on our class novel. Hope you enjoy reading some of them.

This week the children have been focusing on the past tense and how to incorporate into their writing. To achieve their targets the children had to write a Diary entry in the first person, as though they were Bernard, the bottomless robot. The children included expanded noun phrases, prepositions and fronted adverbials in their work. Have a look at some of our work!

This week we have been looking at newspaper articles and identifying the most important features. Following on from this, when we came into school on Wednesday we were shocked to see the devastating scene that was left behind after a robot had broken into our classroom. The children watched some CCTV footage and then wrote a newspaper report based on the findings. Have a look at some of our fantastic newspaper reports and please help us to find the robot!

This week in English we have been using our inference skills. We had a surprise delivery in class from the 'farmers' asking us to find out who the next character was in The Iron Man story. Each group were given either a box of objects or some quotes which they then had to use to justify their reasons as to who they thought the character might be. Following on from this lesson, the children then wrote some fantastic 'show not tell' character descriptions using indirect characterisation. I was blown away!!

During his week, the children have been writing some fantastic dialogues based on the Iron Man. They have been ensuring they include all their OSCs including; inverted commas, new line, new speaker and punctuating their speech correctly. I was hooked reading them!

The children have enjoyed reading our class novel, The Iron Man. Today was an opportunity for them to perform actions to the poem.

The Coming of the Iron Man

The Iron Man stood on the brink of the cliff
Tall as a house, all rigid and stiff.

His great iron head turned left then right
As he stood on the cliff in the dark of night.
His headlamp eyes searched far and wide.
His iron ears listened to the swell of the tide.

Where he had come from, no-one knows
But there on the cliff where the seagulls rose,
The Iron Man stood with the wind in his face.
Then he lifted a foot and stepped out into space.

Crashing...crashing...thrown about
Till his legs fell off and his eyes fell out.

Scattered and battered his body parts lay
Then silence, silence, till break of day.

Then an eye and a hand in a seagull's nest
Moved together to find the rest.
A headlamp eye and a crablike hand
Moving together over the sand.

Bit by bit each piece was found
Till the Iron Man stood and looked around.
But still he strode and searched the beach
For an ear that was lost and out of reach.

Was it the sea that had stolen his ear?
For the Iron Man turned and showing no fear
He walked in the sea deeper and deeper,
Though the water rose where the shore grew steeper.